CALLIE AWAKENS (book I)
I just released this and I really think Callie is a great character and that this first book in the series will be addicting to readers. I've had this character in mind for many years and really enjoyed writing this first book.

​MS-13 has brought evil to the streets of Fort Myers. They are kidnapping young girls off the streets, addicting them to drugs, and forcing them into prostitution. The police are helpless; all their witnesses either end up in pieces or suffer profound memory loss. Business is pretty good for the gang until one evening their ‘snatch crew’ runs into Callie, an unlikely Samaritan. She’s a sixteen-year-old girl, just 5 feet tall, who rides a Ducati Monster 796. She also happens to be a gifted student of the Israeli martial art of Krav Maga.

Callie is two years ahead of her classmates and socially isolated from them by her genius IQ and the principled, ambitious, self-determined approach that she brings to everything she does. She’s determined to become a commercial ship captain and after her father, a shrimper, refuses to give her needed sea time or support her career choice in any way, she moves to Boca Grande and into the home of a wealthy aunt who empowers her in ways she’d never imagined. Callie gets a job on a commercial ferry to advance her sea time and also starts training in the brutal martial art of Krav Maga to help her compensate for her tiny stature.

When she returns home in the Fall and interrupts an attempted MS-13 abduction and takes down two gang members in the process, she and her family become targets of the ruthless gang and she finds herself in over her head. Fearing for Callie’s life and the lives of her family, Aunt Nancy gets in touch with Jesse McDermitt and Billy Rainwater (two of Wayne Stinnett’s iconic characters) and its game on with Callie, Billy, and Eva Dahan (Callie’s Krav Maga instructor), up against MS-13. Callie will survive, but at what cost to her and those around her?

Callie is the opposite of a snowflake. Think “Rhonda Rousey with a genius IQ and attitude.” She's a physical, positive, quirky, hardworking, principled, unstoppable force with an insatiable appetite for learning new skills, setting ambitious goals, and doing whatever it takes to achieve them. If you like strong, independent, female characters, you'll love Callie. This is book I of a new series.

MAELSTROM (in three books).
Ryan Cunningham planned on leaving all his responsibilities behind by sailing his boat South from New England to the Caribbean. Funny how life throws you curve balls. When he leaves the dock his crew has grown to include a beautiful, young, single mother of two in recovery whose trying to put her life back together, her 12 year old daughter, her 5 year old son and a 120lb Black Labrador named Clifton. On the first leg of their trip to Bermuda they survive a two-day storm of hurricane force winds.

In Bermuda they run afoul of an amoral, international drug smuggler and his mega-yacht full of misfits and it will take everything they have to survive his attentions. Ryan is normally a "live and let live" kind of a guy but sometimes that just isn't possible. Ryan finds he has to reach deep, down inside to a dark primitive place in order to survive and save his new family.

The author is a licensed sea captain who has made over 20 sailing trips between New England, Bermuda and the Caribbean. He has also run larger ships in the oil fields, charter boats in the FL Keys, a ferry in Boston Harbor and sailed in the Mediterranean and South Pacific. He lived in Key West for 6 years and currently resides in Sarasota, FL with his wife Louise and their two black labs.

About Rip Converse, the Author

Rip Converse grew up on the water in a small coastal town in New England and spent my summers sailing and boating in Buzzards Bay, the Elizabeth Islands, Cape Cod and Nantucket. Later in life Converse became a licensed Captain, drove the Cuttyhunk ferry, worked the oil fields in the Gulf of Mexico, ran large charter catamarans out of Key West for 6 years and a ferry in Boston Harbor. He has also raced in the Marion to Bermuda race several times, made over twenty offshore passages between New England, Bermuda  and the Caribbean, cruised the Mediterranean and parts of the South Pacific and spent a year living on a classic wooden sloop in Antigua. Drawing on this extensive experience for both inspiration and vivid realism in this, his first novel.

Converse currently live in Sarasota, FL with his wife Louise and their two black labs Emma and Asher. In addition to his writing and boat deliveries he also makes exquisite, custom, sculpted, rocking chairs that sell for $5,000 - $30,000.  www.parkerconverse.com 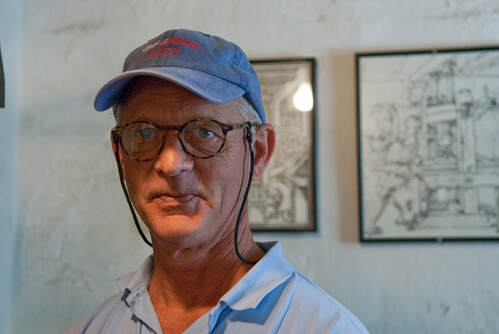